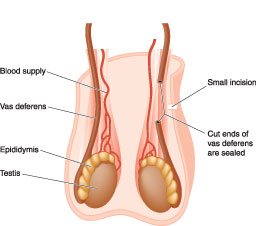 What is a vasectomy?

A vasectomy is a minor surgical procedure for men in a stable relationship who have completed their families. The vas deferens is the duct connecting the epididymis to the ejaculatory ducts, and the surgical disconnection thereof leads to ejaculate without spermatocytes (aspermia)

Is this a permanent procedure?

YES. Although vasectomies can be reversed in selected cases, it should always be seen as a permanent procedure.

What to expect during the procedure?

Vasectomies can be performed under general or local anaesthesia.

The surgical technique is similar for both anaesthetics. A single puncture no-scalpel technique is used, with the vas deferens on both sides transected, a segment removed, and the open ends cauterized or sutured. A single skin suture may be inserted, and a dry dressing applied.

This is performed as a day procedure, with minimal after care needed. It is necessary to organize transport from the hospital after the procedure to avoid driving yourself.

What to expect after the procedure?

Minor discomfort will be experienced for a limited period, and regular analgesics and cold compression is helpful initially. Tight underwear or scrotal support underwear is also helpful..

Limited physical activity is advised for the first 5 – 7 days, with return to normal activity within 1-2 weeks. Sexual intercourse can be resumed pain permitting.

Potential complications include scrotal hematoma/swelling, wound sepsis and bleeding from the surgical site, and is usually mild and self-limiting. Antibiotics may be required in selected cases.

Is the procedure effective immediately?

No, continued contraception is necessary for 3 months after the vasectomy, until a sperm analysis confirms aspermia. Only stop contraception once your urologist confirms a successful outcome.